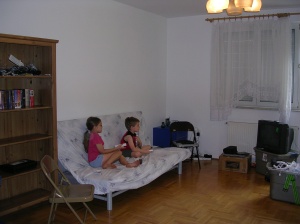 Our first week in our new apartment has been busy. We’re down to the last four or five tubs that haven’t yet been completely unpacked. We came here with nine tubs and a suitcase (besides all of our carry-on baggage which we maxed out), and I brought 6 tubs with me when I came over in May. We’ve been able to get a good amount of furniture quite quickly between items left here by former missionaries (thanks, Chip and Jenny!) and borrowing from our landlord, who has been very helpful. Not bad, considering that our apartment was almost entirely unfurnished when we arrived. Getting settled in has been a lot easier this time than it was 8 years ago when we did it for the first time. It helps when you know where all the stores are and which ones to go to. It also helps that I can speak Hungarian well enough to do any kind of purchasing transaction.

Hannah and Matthew have actually remembered quite a lot from when we lived here before. Last week we went to a little ice cream parlor on the corner down by our old apartment (which is about four or five blocks from our new place). They both remembered the place, and in fact Hannah even remembered one time when I took her to the parking lot right across from the ice cream place to learn to ride her bike without training wheels. I was surprised that she remembered that. As we were eating ice cream, I asked the kids if they felt like they were in a foreign country yet. Of course they asked what foreign meant, so I explained it was a country other than your own. They both said no. They seem to feel right at home, which is great at least for now. We’ll see how it goes as things progress. Hannah misses all of her friends from back home, although she’s actually been able to communicate with some of them through email and VoIP phone.

For me this move has been quite a smooth one. We already have our internet hooked up in our apartment. I ordered it on Friday and it was installed on Monday even though they told me the average wait time was 9 days. What a contrast to the first time we came in 2002. Back then we had to wait three months to get a phone line just so we could have dial-up internet access to do email. For the first three months I took the tram to the nearest mall to use their internet cafe. Now within a week we have wireless broadband internet in our home. Amazing! Wireless internet use has really exploded here. I can see three or four other wireless networks in range here, and I’ve seen several others at different times.

I have been asked how our support has been doing since we had our last couple of meetings before we left. The answer to that is that it hasn’t really changed. We are still at about 93% funded. However, we are very excited at how the Lord provided for us leaving from the States. We received a large donation several months ago from Canada, but because of the processing time for Canadian gifts it only came through last month as we were leaving. The amount was just enough to cover our airfare and extra baggage costs. So we praise the Lord for that! For those who might be interested in helping with our support, you can donate online by following the link on the sidebar.

Next week we go to English camp in Vác (pronouned “vats”). Hannah is extra excited because she’s actually old enough to be a camper herself, not that she really needs to learn English. But she has been particularly affected by not having friends her age yet, so I think camp will be really good for her. Tricia will probably be spending a lot of her time following Jonathan around and keeping him out of trouble. She’ll have the company of another missionary mom here who’s in the same boat. I will have to come back for a meeting of the Wesleyan Alliance theological school, so there will not be much time to rest.

Partner with our family!

If you would like to donate financially to support our ministry, you can follow the link below to donate online through the TeachBeyond website. All donations are tax deductible.